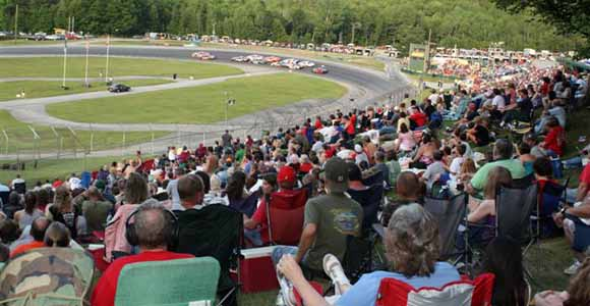 NAPLES, ME (May 21) – Not very long ago, it was pretty unlikely for New England race fans to think that the Pro All Stars Series (PASS) AIM Recycling Super Late Models Pres. By Kenny U-Pull would ever race at Vermont’s Thunder Road International Speedbowl.  But, what was once a dream for many will become a reality when the stars of PASS hit Thunder Road for the first time ever this Sunday afternoon as part of the Mekkelsen RV Memorial Day Classic.  The PASS AIM Recycling Super Late Models will compete for 150 green flag laps, along with action for Thunder Road’s ACT Late Models, the Bond Auto Tiger Sportsmen, and the Allen Lumber Street Stocks.

4-time PASS AIM Recycling Super Late Model champion, Ben Rowe, is having a resurgence in 2015 as he looks forward to this weekend’s action at Thunder Road.  Rowe capture the first PASS National Series checkered flag of the year at Anderson Motor Speedway in South Carolina in March and ended a nearly three year winless streak in PASS North with his win last weekend at Autodrome Chaudiere in Quebec.  Although this will be the first trip for PASS to Thunder Road, it is not the first for Ben Rowe.  He has been to the Vermont track with his dad, Mike, and has even raced there himself.

“Thunder Road is a tight quarter mile racetrack with some pretty decent banking,” said Rowe as he described the speedway.  “I raced there with ACT back in 2008 and I think this Sunday’s race should be outstanding.  The fans at Thunder Road are great and I believe they will see something with PASS that they will be really pleased with.”

Ben Rowe enters Sunday’s Memorial Day Classic 7th in PASS AIM Recycling Super Late Model points, but less than 100 markers behind the points leader, his father, Mike.  Racing has been extremely tight and competitive throughout the first four races of the season and Ben Rowe does not see that being any different at Thunder Road.

“The racing is going to be tight and fast for sure,” said Rowe, driver of the #4 Richard Moody & Sons Construction Toyota.  “I just hope everybody will give each other plenty of room and race hard at the end.  It’s definitely going to be a big deal to be the first PASS winner at Thunder Road.”

The weekend starts at Thunder Road International Speedbowl on Friday, May 22 with a Thunder Road-only practice and on Saturday, May 23 with a PASS-only practice from Noon-4 PM.  On Sunday, May 24, rotating practice starts at 10 AM, with heat races, followed by main events, starting at 1:30 PM.

PASS entry forms and the complete weekend schedule for the 53rd Annual Mekkelsen RV Memorial Day Classic can be found at ProAllStarsSeries.com.

The Pro All Stars Series is recognized as North America’s premier sanctioning body for asphalt Super Late Models and boasts such marquee events as the legendary AIM Recycling Oxford 250 Presented By Kenny U-Pull at Oxford Plains Speedway and PASS South’s Easter Bunny 150 at the historic Hickory Motor Speedway.  For technical information concerning all PASS divisions please send questions to passracing@roadrunner.com.  For media or marketing questions, please contact Alan Dietz at 704-231-2039 or alandietzpass@live.com.  And, don’t forget to “Like” the Pro All Stars Series on Facebook or follow us on Twitter @PASSSLM14 to keep up with breaking news as it happens.