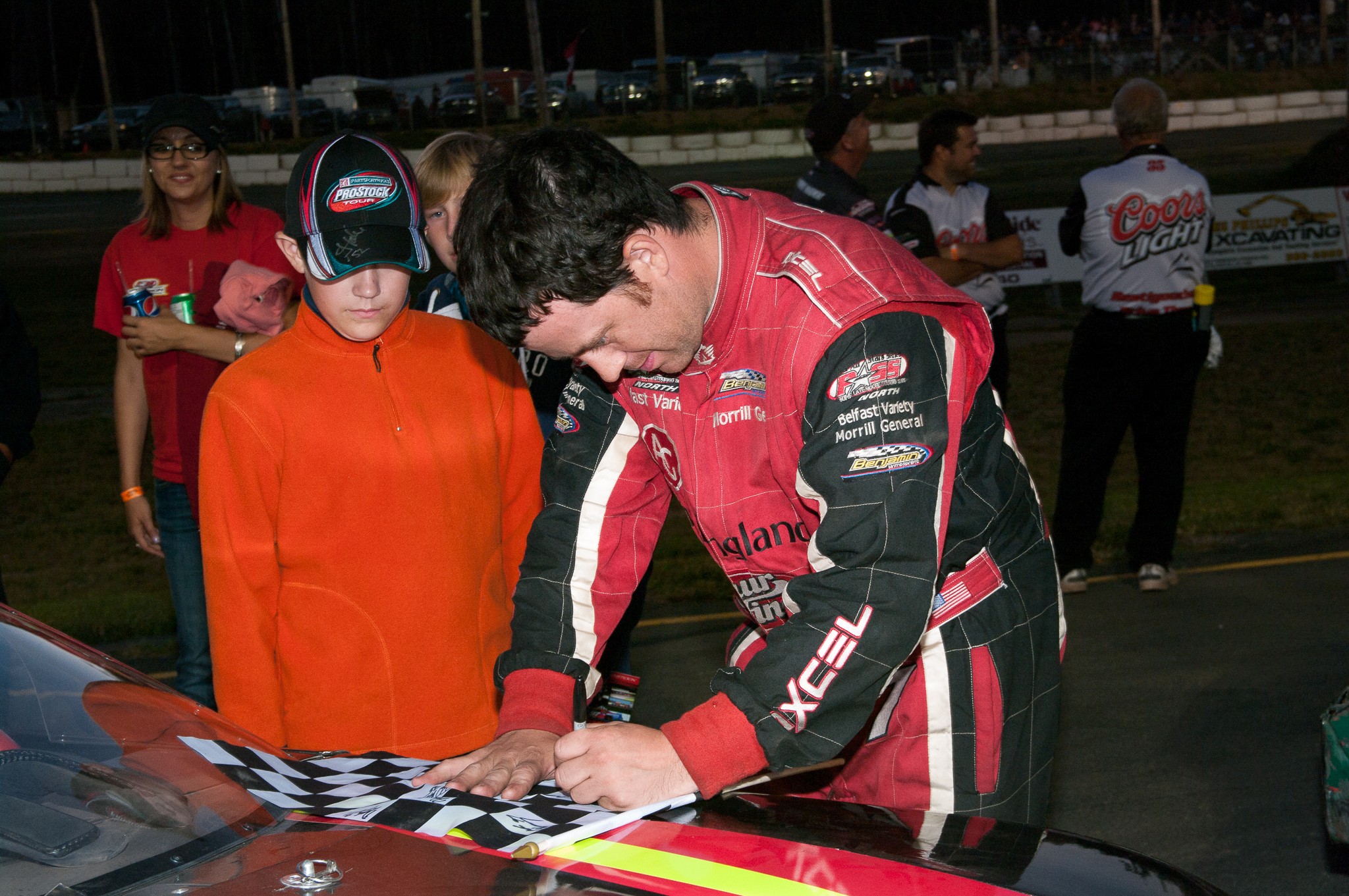 Thirty-six competitors pulled in the gates at Oxford Plains Speedway on the weekend to try and take the Ripley and Fletcher Ford 150 for their own.

Mother Nature wasn’t one of those included in the 36 car field and while she tried to take the victory on the day, it was the cars and stars of the Pro All Stars Series (PASS) North Super Late Model division that took over to put on a show for those that stuck it out.

In the end, it was 2012 series champion Travis Benjamin of Morrill, Maine who held the checkered flag at a race track where he took the biggest victory of his career months earlier.

The reigning TD Bank 250 champion started 13th on the grid and methodically worked his way to the front of the field. The #17 Belfast Variety Ford took the lead on a Lap 138 pass on a returning Richie Dearborn of Hollis, Maine and held the position to the first checkered flag of the 2014 season.

The pass for the victory was not easy to complete for Benjamin as he worked over Dearborn for numerous laps before pulling to the inside of Dearborn in Turn Three. The two worked through heavy lapped traffic with the eventual winner working low and top sides of the #33 Chadwick & Baross Chevrolet. When it looked like Benjamin would successfully roll the top line to the lead, the two would come up on lapped traffic, making Benjamin regroup before making another pass attempt.

Dearborn, who said in victory lane he will run all the “local races” on the series for the first time since the 2010 campaign, led a majority of the laps after taking the lead from Falmouth, Maine’s Scott Mulkern on Lap 65. Dearborn looked poised to take the feature win in the middle portion of the event, holding off the likes of Mulkern and Easter Bunny 150 winner DJ Shaw on a handful of restarts in the second half of the Ripley and Fletcher Ford 150 before Benjamin turned the wick up in the final 25 circuits of the race.

Likewise, Mulkern was lightning quick at the start of the race, setting a quick pace after swapping the lead with Trevor Sanborn in the opening dozen laps of the race. Sanborn started third in the race and had taken the lead quickly from pole sitter Shaw. Sanborn and Mulkern had been two of the strongest cars in the opening segment of the race before Dearborn worked his way to the front from his eighth place starting spot.

Shaw was never too far from the front of the field and was charging hard at the end, nearly getting Dearborn for the second spot at the end through lapped traffic. In the end, the #60 Precision JLM Chevrolet had to settle for third.

Six-time PASS North champion Johnny Clark was fourth at the end of the race after working his way up from a 12th place starting position in the Ripley and Fletcher Ford 150 with Mulkern completing the top five.

Reigning series champion Cassius Clark was swept up in an accident in the late stages of the race and had to pit for service on the #77 Hight Chevrolet. The defending series and Ripley and Fletcher Ford 150 champion had to settle for 14th at the end of the night.

Another former series champion in Ben Rowe struggled to find the handle of his Richard Moody Construction ride on Sunday, managing to come home in 12th place at the finish.

Shaw, Doiron and Sanborn won the 15-lap PASS North qualifying heats. A 10-lap PASS North Consolation race set the balance of the qualifiers for the event, which was won by Mike Hopkins.

The event had been plagued by Mother Nature but the determined PASS North officials soldiered on to get the first event in the books. Snow on the grounds had postponed the event from the original Saturday, April 12th event while rain on Saturday, April 26th pushed the event to the next day. While a number of passing showers put the event on a delay throughout the Sunday afternoon, all laps that were advertised were run as scheduled.

This included the Colossal Carnage 150 Enduro event, which was run in conjunction with drying the race track under the handful of rain delays throughout the afternoon. PASS competitor Sanborn led numerous laps in an early 2000s Nissan Maxima before a flat tire sent him to the pit area. The event, which featured four rollovers and 81 entries take the green flag, was won by Mike St. Germain of Auburn, Maine. The race was worth a cool $7,000 to the winner.

Mark Lucas and Andy Shaw put on an incredible show up front in the first half of the PASS Modified feature before Lucas spun out of Turn Four and the lead battle at the completion of Lap 18 of the 40 lap race. Shaw and the #0 car then drove away from the field to capture the victory in the season opener. Scott Alexander battled late in the race to take second over Evan Armington.

A wild PASS Sportsman race, which featured a red flag for rain after Lap 21, saw Joe Pastore Jr. go to victory lane. The 50-lap affair saw numerous cautions, most of which saw over half of the field go to the back of the pack at one point for involvement in the altercation. Rusty Poland battled his way to second at the end of the race with Chris Staples taking third.

The AMSOIL NELCAR Legends Tour saw a first time winner in Kevin Girard Jr. The #19 car made a three-wide pass on Terry Kirk, who had led a majority of the 25-lap feature, and Wyatt Alexander to seal his first feature win. Matt Bourgoine was second with Alexander taking third in the feature.

The Pro All Stars Series North Super Late Models, Sportsman, Modifieds and the AMSOIL NELCAR Legends Tour are all in action on Saturday, May 3rd at the Beech Ridge Motor Speedway. The second event on the PASS North Tour will be supported by Southern Maine Motors and has a post-time of 3pm at the Scarborough, Maine oval.

Canadian notes – Geary, NB’s Matt Matheson fought mechanical problems during the racing portion of the show, which relegated the #2 car to an early exit and 35th in the feature. Cornwall, PE’s Dylan Gosbee got run over in Turn One on Lap One of his heat race and his day went down hill from there. Gosbee finished the feature with minor damage in 30th place.