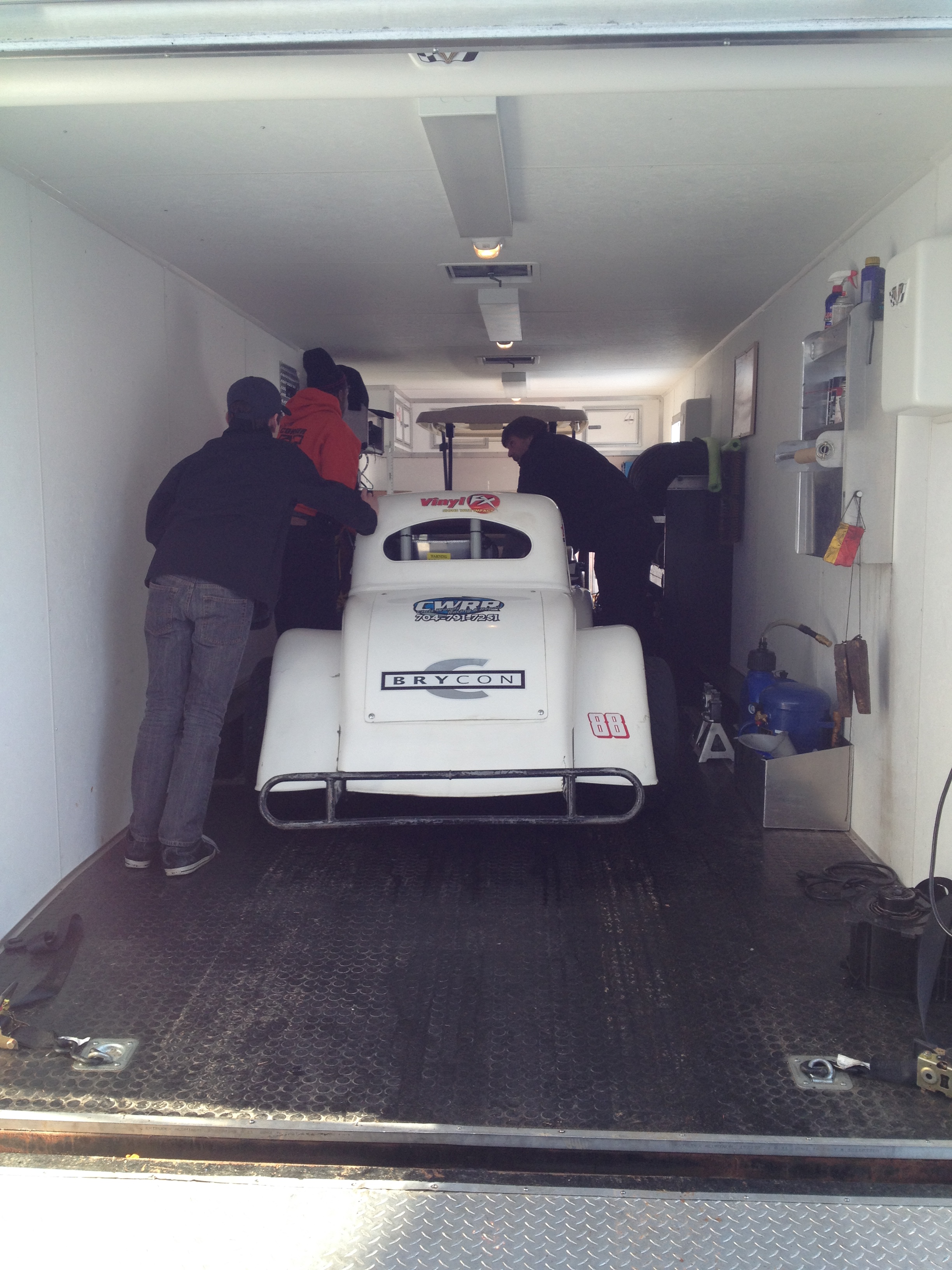 For those that don’t know, Tim’s Corner Motorsports is once again heading back to Winter Haven, Florida for the 2014 INEX Winter Nationals.

I guess you could say it was by popular demand we made the decision, with our friends at Josh Langille Racing hopping on along with the want for the Canadian story at Auburndale Speedway, I am heading down to help bring those stuck in the snow a bit closer to the action.

Speaking about snow – there is a bit of it here in the Mooresville/Kannapolis/Concord area. On Wednesday and into Thursday, the area was hit with Winter Storm Pax, leaving this and surrounding area under about 20ish centimeters of snow. We (I am traveling to the event with Hall Family Racing/Scott and Cory Hall) hit the snow just outside of Harrisonburg, Virginia after leaving Sackville, NB at 3am Atlantic on Wednesday. After over eight hours being stuck on I-81 outside of Christiansburg, we made it to Mooresville, NC for breakfast around 7am Eastern on Thursday. Today it was in the mid-5oFs (low teens Celsius) and the temperature is expected to rise over the next few days – though driving could be tricky for those around here tonight with the temp expected to dip below freezing and black ice expected to form around the area.

The place was a ghost town when we got here with most non-essential businesses shut down for the day and roads barely plowed. It sure made things exciting getting around but for us, it was nothing new. Even some businesses were still closed on Friday because of roads (mostly side streets and secondary roads) not being plowed, including Stewart Haas Racing, JR Motorsports and Richard Childress Racing, which we had to scratch off our list as we hopped around some of the race shops and tourist spots, including Hendrick Motorsports, Roush Fenway Racing, the Sam Bass Gallery, Charlotte Motor Speedway and Chip Ganassi Racing. Thanks to former NASCAR iRacing.com Series World Championship and Pro Series driver John Gorlinsky for the tour around CGR – pretty neat place to be!

Back to the task at hand though, INEX Winter Nationals. The Chris Woods Racing and Repair shop has been busy preparing two Bandoleros for the week with Sackville, NB’s Cory Hall and Deer Lake, NL’s Dylan Rumbolt. The Legend car of Halifax, NS’s Nicholas Naugle has also been here getting some TLC, but has since been loaded up and is headed south with Bryan Naugle. His son and 2013 Scotia Speedworld Bandolero feature winner flies into Florida tonight.

Butcher Racing along with Braden Langille Motorsports is ready to go after some flight changes had to be made to both of their schedules due to the storm ripping up the east coast. Jarrett tells me that the team is headed to Volusia tonight to catch some dirt racing before participating in tomorrow night’s card in Winter Haven, Florida.

We are also expecting Moncton, New Brunswick’s Gary Bursey to participate in the event. While there will be other Canadian teams there, we know Calgary’s Ira Laughy will be in attendance as he chases a Winter Nationals title. Kevin Foisy of Ottawa bested Laughy for the Masters championship in the 2013 edition of the event.

Cory Hall and I are heading down to Florida tomorrow morning with Chris “Woody” Woods and our plans may include taking in Night Two at the New Smyrna Speedway for the World Series tomorrow evening if the teams opts not to run the Saturday card, which is not a part of the Winter Nationals portion of the show. One driver that will not be present at the event is 2013 INEX Semi Pro champion Ryan Mackintosh, who is choosing to skip the event to focus on his senior year of high school. I did cut an interview with him, which we will hopefully have on our Monday coverage and will also be a subject of an article in Herald Wheels in the coming weeks.

It is shaping up to be a great week of racing in Florida for Legend and Bandolero cars. If you are coming down here and haven’t had the chance to see the Winter Nationals, be sure to stop in. Feature racing typically takes place early in the afternoon (except for Friday where racing will run under the lights) and we are about one hour west of Orlando, or about two hours west of New Smyrna Beach. A complete schedule will be posted on Sunday, once we have a copy of it.

I’ll have the recorder on me, so be sure to stop by the TCM mobile office if you are roaming the pits and have a chat with me so we can give those back home something to listen to! In addition, we will also have photos and text updates throughout the day on the site and race updates on our Twitter feed, which you will be able to follow all in one place on TimsCorner.ca, beginning on Sunday’s practice day and all five days of racing!

Big thank you as well to John Haggan at INEX and Rusty Marcus for getting me set up with media credentials for the event at Auburndale and David Meehan for helping me get connected to them. Big thanks as well to Kim Brown at New Smyrna Speedway for getting credentials for the World Series. I’m excited to catch up with Denver Foran and all of the other Canadians down racing on the high banks!

This is gonna be a fun week and I hope you will all be along for the ride with me! Leave me your comments on Facebook (facebook.com/timscorner) on what you want to see or hear and I’ll try to get it done for you.

Until Sunday, keep the hammer down and we’ll see you at the track! 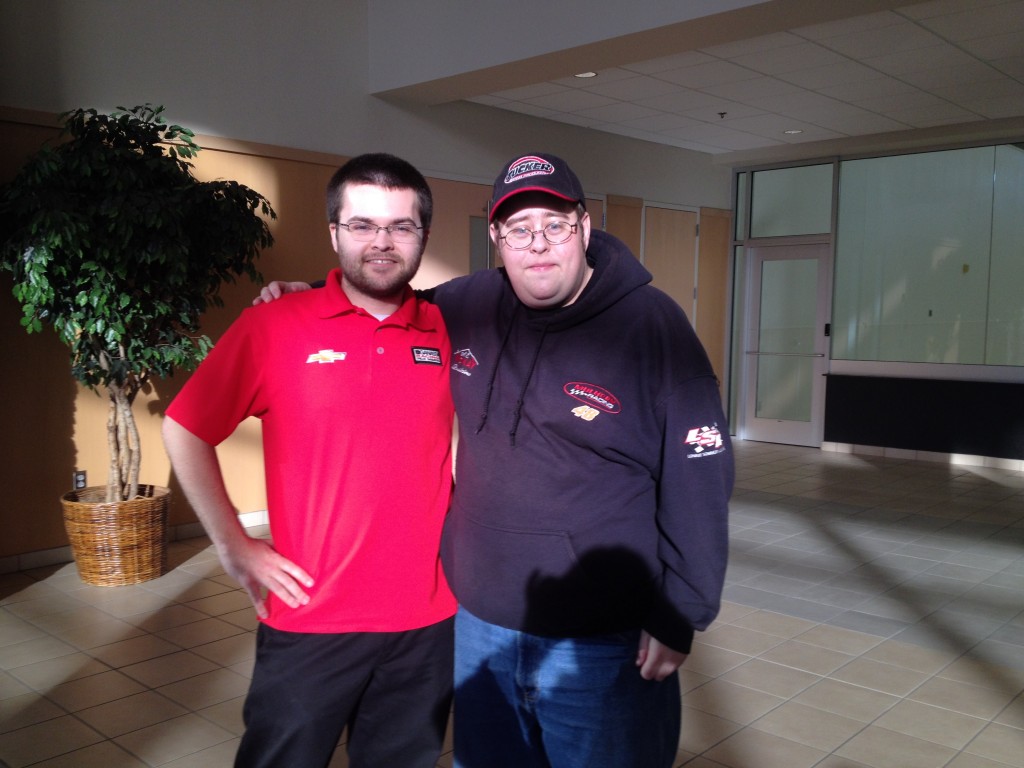 John Gorlinsky (left) and Tim Terry share a moment after a stop at Chip Ganassi Racing. 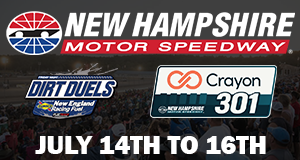