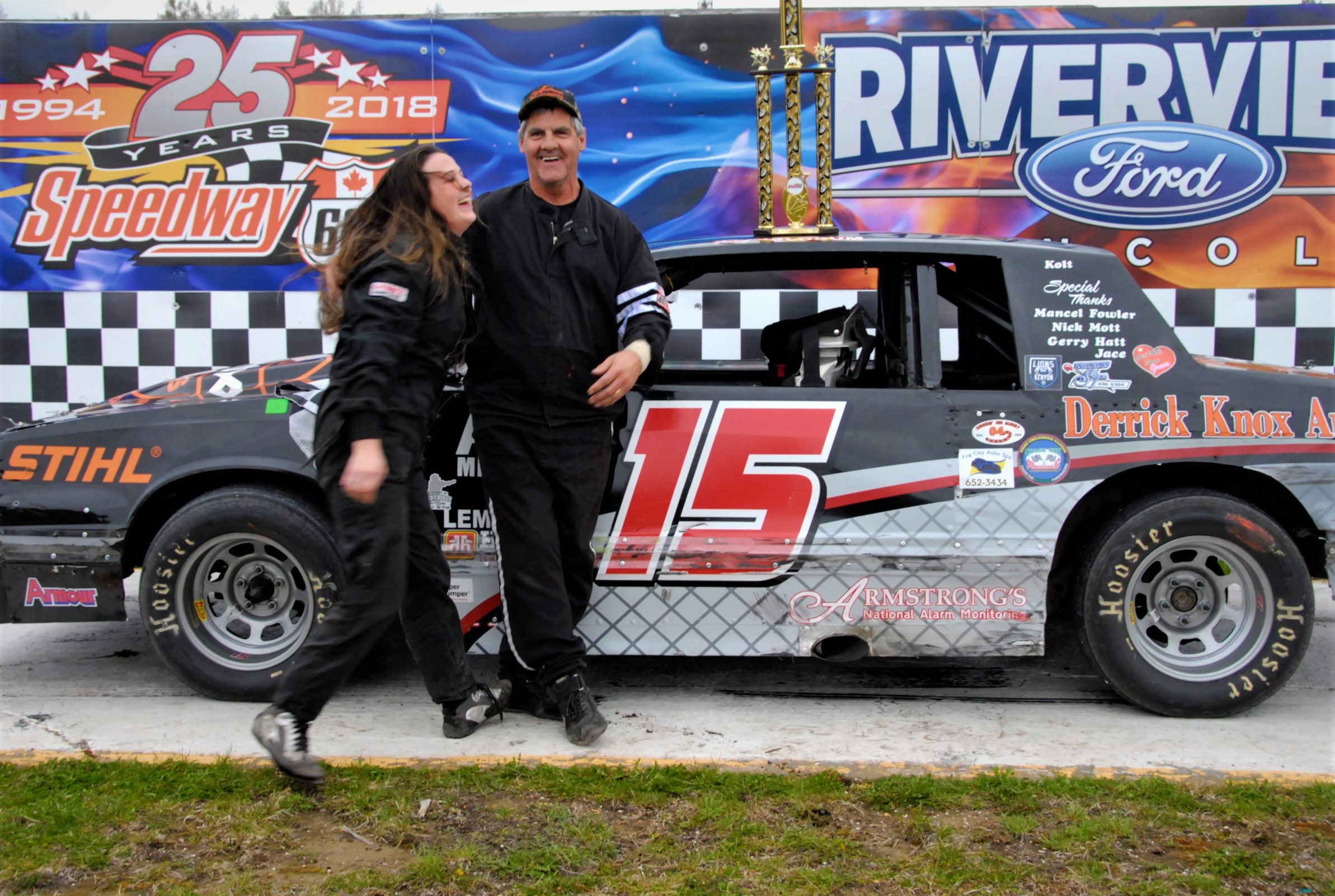 (GEARY, NB – June 12th, 2019) – Speedway 660 will be alive with stock car racing action once again this Saturday evening. A full card will entertain fans on Saturday, June 15th and will feature qualifying and main event action from all four Speedway 660 house divisions as they battle for checkered flags and championship points. The action in the Geary woods on Saturday has a post time of 6:30pm.

Race car drivers typically don’t like to share victory lane, but that is the theme though three completed race events this season. In total, a dozen features have been run between the four classes that compete weekly at the track and only one driver, Roger Slocum (Chipman, NB) in the DMR Auto Street Stock class, has multiple feature victories. He credits keeping his car clean and out of trouble to his early season success behind the wheel of the No. 15 Knox Auto Sales Chevrolet.

“I’ve managed to stay out of the mishaps so far this season which means a lot,” said the 2013 division champion looking back on the opening races of this year. “I think there is more pressure on the young snappers to beat me than me trying to beat them. It’s nice to get off to a good start with two feature wins so far, I don’t think there is any pressure on us yet as there is a long way to go in the season. We will have to come from the back of the field on Saturday night. Hopefully we can come from behind again and poke our way to the front!”

Brody Levesque (Lincoln, NB) became the third different feature winner in as many races in the Fredericton Gun Shop Sharp Shooters last weekend. Levesque successfully defended his Sharp Shooters 50 title from one year ago, but knew going in that it was not going to be an easy task.

“Last week meant a ton to me and our little team,” said Levesque as he reflected on his win one week ago. “Winning the 50 lapper last year was pretty darn cool because we had come so close. To win this second one meant a lot because the competition is crazy close in this class. It’s awesome to be leading the standings coming off a big race and I plan on trying my hardest to stay up there. I’ve been racing for a few years now and I know that the points can change quickly with the top notch drivers and tight competition this season. Anything can happen.”

Levesque and the No. 05 Greg Stewart Limited team have a five point lead on Kids Day winner Matt Martin (Haneytown, NB) and the Hall Racing entry, which has been piloted over the first three weeks by Ryan Bernard. Season Opener winner BJ Gillespie (Harvey, NB) slipped to fourth in the standings after the Fredericton Gun Shop Sharp Shooters 50 with rookie Tristan Harris (Harvey, NB) completing the top five of 21 drivers who have competed in at least one of the first three races this season. 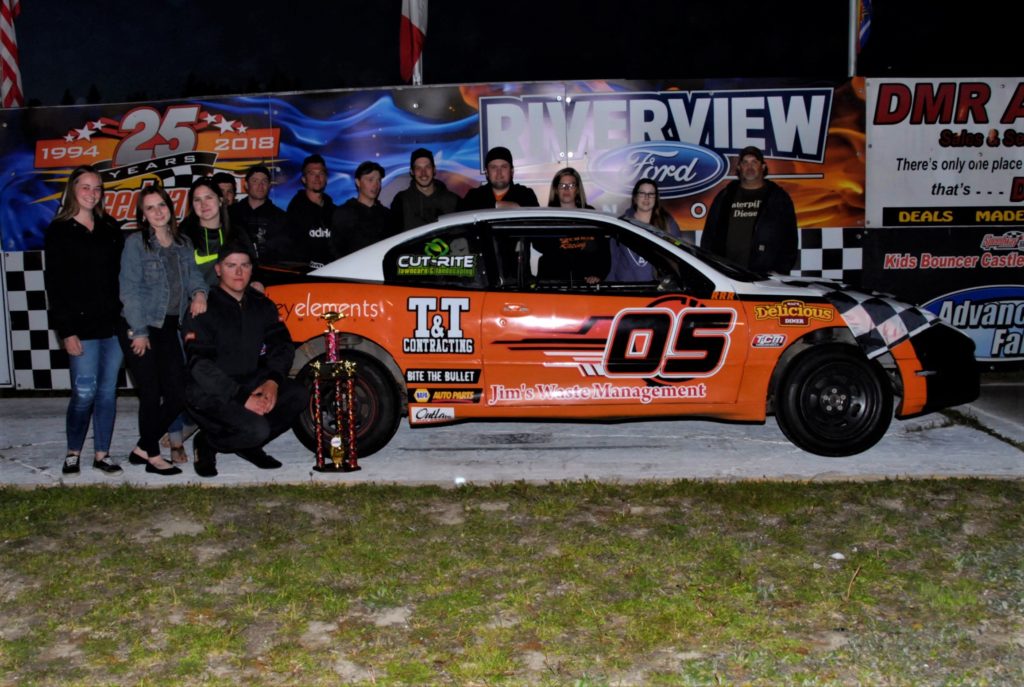 Rebounding from a loose wheel that took him out of the lead in the final laps the week prior, Dave O’Blenis (Boundary Creek, NB) got back to Riverview Ford Lincoln Victory Lane last Saturday in the RE/MAX East Coast Elite Pro Stock division. The win moved him closer to Greg Fahey (St. Stephen, NB) in the standings, sitting just ten points out in third. Fahey is the only driver in the class to finish on the podium in each of the three features so far in 2019. Sandwiched in between the two multi-time champions is Brent Roy (Hanwell, NB). The driver who won the Season Opener is just three points out of the championship lead after three events.

The top three in the Martin’s Home Heating Sportsman points are the three feature winners in the division so far in 2019. Curtis Collins (Barnesville, NB) now has a two point lead over Richard Atkinson (Geary, NB) with Alexandra O’Blenis (Boundary Creek, NB) only four points behind the No. 40 car. Alexandra’s younger sister Courtney O’Blenis (Boundary Creek, NB) finds herself fourth in the standings. The quartet has established a gap on the rest of the field, with 22 points between Courtney and a tie for fifth featuring Ryan and Rob Raynes (Saint John, NB). The 40-lap Sportsman feature on Saturday will serve as the final tune up before the June 22nd running of the Martin’s Home Heating Sportsman 100, the first 100-lap Late Model Sportsman race of the season in the Maritimes.

Returning for 2019, children aged 15 and under will be admitted to the grandstands for free to every stock car event at Speedway 660. The admission structure makes it easier for families to attend race events at the track and received positive feedback from fans when implemented mid-season in 2017.

Adult grandstand admission price for Saturday’s Weekly Point Racing card is $15 (aged 16 and up). Pit admission is $18 and is restricted to those 16 years of age and older. Tickets are available at the gate on race day. Pit gates for competitors will open at 1pm, grandstand gates open for spectators at 5:30pm with racing getting underway at 6:30pm. A complete race day format will be available via Speedway660.com later in the week.

About Speedway 660:
Speedway 660 is one of Canada’s premier stock car racing facilities. Located in New Brunswick’s Fredericton region, it attracts race teams and fans from the Maritimes, New England and Quebec. The Speedway 660 racing season runs from mid May until Labour Day Weekend. SpeedWeekend, one of the most prestigious short track events in eastern North America, wraps up Speedway 660’s racing season.