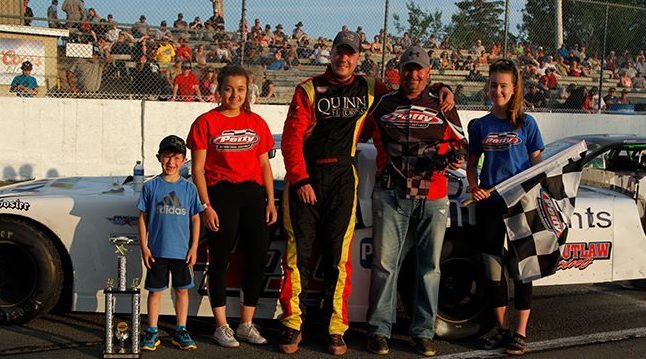 (HALIFAX, NS – March 20th, 2018) – After three seasons full of a racing edition of musical chairs, the beat has stopped and one driver will drop into the seat of the No. 41 Dulux Paints Chevrolet for 2018.

Truro, Nova Scotia’s Dylan Blenkhorn will slide in the window of the Craig McFetridge owned Late Model Sportsman car for a minimum of eight races this year. The former IWK 250 and Toromont Cat 250 winner ran one race in the Dulux Racing car in 2017, coming home the winner during the MetalCore Night of Destruction event at Petty International Raceway last July.

“After three years and nearly a dozen drivers in the car, we have decided to give the driver’s seat some stability in 2018,” said McFetridge. “We have had a lot of fun over the past three seasons and this is not to say we won’t have the odd driver drop in but Dylan will be our primary driver this year.”

The team will compete at four different race tracks and will focus on major events across the Maritime Provinces. The first race slated for the team is the 24th Annual Shriners Classic in June at Scotia Speedworld. The team will return to the 3/10-mile oval on Friday, August 10th for the Affordable Fuels 100.

Dulux Racing will take to the high banks of Riverside International Speedway outside of Antigonish, Nova Scotia twice in 2018. The team will compete in the R&D Performancenter 150 on Friday, July 13th during the IWK 250 Super Race Weekend and will return on Friday, August 17th for the R&D Performancenter 100 on the eve of the NASCAR Pinty’s Series Bumper to Bumper 300. Both events are a part of the NAPA Sportsman Series.

Three races at Petty International Raceway appear on the schedule for the team. The team tentatively has the Caleb Dunn Memorial NAPA Sportsman Series 100 penciled in for Saturday, August 4th. The team will also compete in the 54th River Glade International on Friday, August 24th in a 125-lap event and the Fifth Annual Mike Stevens Memorial Late Model 75 on Saturday, September 22nd.

The 2018 season will wrap up at the Shediac CENTRE for Speed during the Atlantic Championships. The Late Model Sportsman division is slated for a 125-lap event on Saturday, September 29th.

“Janet and I have got to know Dylan pretty well since Petty International Raceway re-opened,” said McFetridge of the relationship with his 2018 driver. “Dylan is a very talented young driver who can not only get the job done but works on his own cars, which is something this team has needed for some time. Scott Fraser Racing (SFR) built us a great race car and it is time to see if it capable of running up front on a regular basis.”

Blenkhorn, who has also won a feature in a Sportsman car at Scotia Speedworld, has seen success in every division of motorsports he has competed in. From Bandoleros to Legends, Demolition Derby to ATV Drags and everything in between, his trophy case features hardware from many different motorsports disciplines that reach further than stock cars. He hopes to add some major Sportsman titles to the shelf while having some fun with McFetridge and team.

“I’m really looking forward to this opportunity,” said Blenkhorn. “When I was coming up through the ranks, I missed the Sportsman division step. Most young drivers that have started in the last ten years or so have gone from a Bandolero to a Legend car and to a Pro Stock, including myself. I ran a few Sportsman races to get accustomed to a full bodied car but never really got to spend the time in the division before heading to Pro Stock.”

While it is a division that he hasn’t spent a lot of time in, it is one Blenkhorn’s family has a rich history in.

“I grew up around my father (Paul) racing Sportsman cars. When something broke, we would go to the salvage yard and find a part to bolt onto the race car. Technology in these cars is coming along but it hasn’t been as rapid as what has been changing on a Super Late Model. I love what the Sportsman class is built on. There are some great race teams in the division and the competition over the last few years has been incredible. I can’t wait to strap in and have fun at the track with Craig and the crew!”

Unsure on his Pro Stock schedule for the year at press time, Blenkhorn has been quite busy away from the track in the off season. Blenkhorn has entered the world of business ownership, recently purchasing AutoRite Service Centre in Lower Truro.

There is one thing Blenkhorn would like to accomplish though in 2018.

“I’d like to pull the three peat on the IWK 250 Super Race Weekend,” said the defending IWK 250 champion. “I am looking for a Legend car to run the Maritime League of Legends Tour race on the Friday night of that weekend but I think that would be a pretty neat goal to accomplish.”

The Dulux Racing Team’s schedule is subject to change without notice.