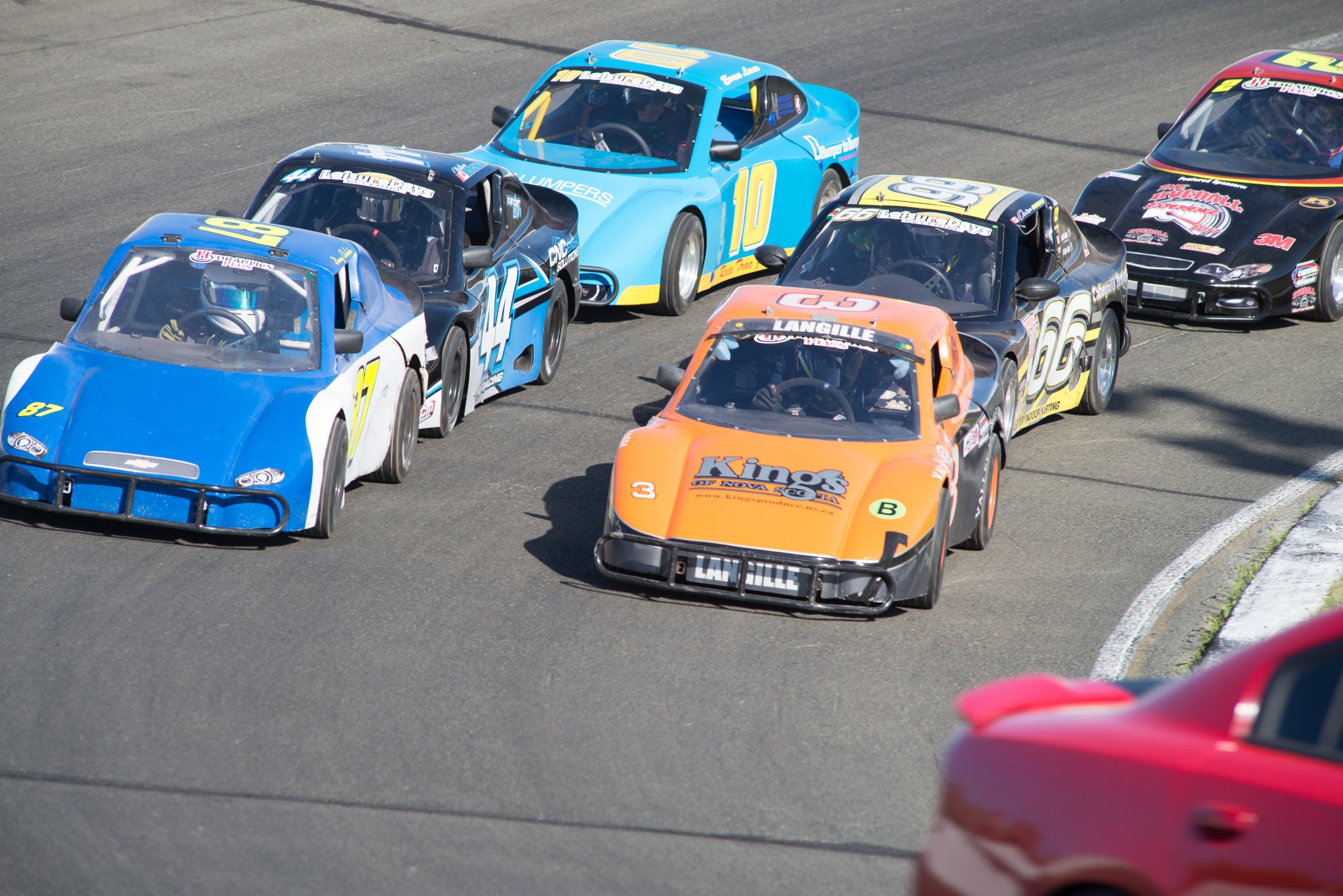 (River Glade, NB; August 2nd, 2017) – Petty International Raceway continues the tradition of honoring the late Caleb Dunn, a legend in Maritime short track racing, with the fifth running of the Caleb Dunn Memorial this Saturday night. The race will also mark the halfway point in the season and will offer drivers double championship points for the second time in 2017. The full card of racing, which features double headliners in the Limited Late Model 100 and Westwood Estates Triple Crown 50 Event #2, will go green on Saturday, August 5th at 6pm.

The Limited Late Model class will see Kenny Mackenzie Jr (Salisbury, NB) lead the field into competition for 100 green flag laps on Saturday evening. Mackenzie has won two feature events this season, including the most recent race on Friday, July 21st. Consistency has Jordan Veinotte (Porter’s Lake, NS) in second, just seven points out of the top spot. Local favorite Neil Crawford (Salisbury, NB) and Late Model freshman Justin Beers (Moncton, NB) complete the top four in the standings. With double points on the line and 100-laps to complete on Saturday night, it is expected to be an unpredictable night in the championship picture.

A number of familiar faces are expected to run for the prestigious Caleb Dunn Memorial 100, including defending champion Alexandra O’Blenis (Boundary Creek, NB), who will drive the #41 Dulux Paints Chevrolet for Craig McFetridge. Russell Smith Jr (Lakeside, NS) will return to compete for his second Petty International Raceway win of the season while Ryan Raynes (Saint John, NB) will make his first start on the high banked oval for the season. A number of drivers are expected to announce their intentions to compete as the race nears.

Competitive is one way to describe the Westwood Estates Street Stock division as they head into their fifth point race of the season and second of three Triple Crown races. Rookie Logan Power (Riverview, NB) won the opening race of the season and leads both the Triple Crown and overall point standings. In the season long point chase it is Chuck Mercer (Mount Hebron, NB) that sits just three points behind Power. James “Hollywood” Matchett (Miramichi, NB) is third in the standings after his win on July 21st. Albany, Prince Edward Island’s Mike Duskey sits in fourth with four races left to go. The top four overall each hold a feature win on the season. Nick Cudmore (Goshen, NB) hopes he is next in line for victory lane and is well within championship chase as he sits fifth overall.

While former champion JR Lawson (Shubenacadie, NS) won his first feature race of the year last time out, it is another two former division titlists slugging it out for the 2017 Mister Transmission Mini Stock championship. Mike Weagle (Salisbury, NB) enters the Caleb Dunn Memorial with a three point lead on reigning champion Tim Webster (Beaver Bank, NS). Mike Edwards (Penobsquis, NB) continues his impressive season with a third place run in the championship, ahead of Patricia Taylor (Salisbury, NB) and Rob Poirier (Irishtown, NB). The division has seen three different feature winners with Webster being the only repeat winner in the Mister Transmission Mini Stock division in 2017.

The Modified track championship is led by Joe Hoyt (Wassis, NB) after two races. Doug Matchett (Miramichi, NB), Mike Raeburn (Hampton, NB) and Paul Costain are all within three points of Hoyt heading into their third race of the season. Costain won the season opener for the open wheel division while Raeburn was the winner on July 8th.

Brenda Shortell won the latest Women on Wheels event and now the defending champion of the exciting division finds herself deadlocked in the standings with season opener winner Paula Evans. Their feature event on the Caleb Dunn Memorial card is the third of fourth for the thrilling division comprised of novice female drivers.

Brenda Dunn, the daughter of Caleb Dunn, will make her Women on Wheels debut at Petty International Raceway on Saturday evening. Brenda Dunn will drive the #41 car, piloted on a regular basis by Kaila Smith.

Fans are reminded that Kids Rides will begin the evening’s festivities at 6pm. Kids will be able to come down on the track and take a ride around the high banks with their favorite driver at a safe speed. This is in addition to the Junior Fan Award, which kids can fill out a ballot to be selected to be in the spotlight during the intermission of the show.

Grandstand admission prices for Saturday’s Caleb Dunn Memorial Mid-Season Championships are $20 for adults and $10 for youth aged eight to 18, while children seven years of age and under will be admitted free. Pit admission is $25 and is restricted to those 16 years of age and older. Pit gates for competitors open at 1:30pm, grandstand gates open for spectators at 4pm with racing getting underway following Kids Rides at 6pm. Music will follow the evening’s racing card outside the front gate.