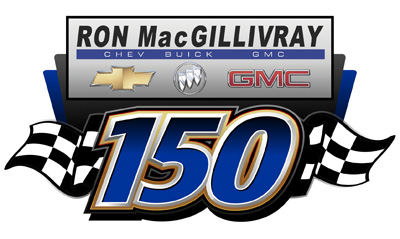 The event is round two of 12 championship races for the Parts for Trucks Pro Stock Tour and the first of three series stops this year at the acclaimed short track near Antigonish.

Ron MacGillivray Chev Buick GMC first partnered with Riverside International Speedway in 2006 when the facility reopened after a complete rebuild to make it one of the premiere short track facilities in Canada. In 2008, the partnership expanded to include the Parts for Trucks Pro Stock Tour (PST) and the event entitlement; in 2013 the event grew from 100 laps to the current 150 laps, adding even more excitement for fans and racers.

In its nine-year history, the Ron MacGillivray sponsored races at Riverside have seen six different winners with defending PST champion Donald Chisholm (Antigonish) and Shawn Tucker (now retired – Fredericton, NB) tied for the most wins at two races each. Greg Proude (Charlottetown, PE), JR Fitzpatrick (Appin, ON), and the late Mike Stevens (Moncton, NB), all have one win each, as does the defending winner of the Ron MacGillivray Chev Buick GMC 150, George Koszkulics (New Glasgow).

Besides pro stock action, fans in attendance June 11 at Riverside will see the season opener for the NAPA Sportsman Series with the Highland Building Centres 50.

Advance tickets for the Ron MacGillivray 150 will be available in May. There will be plenty of free parking as well as free non-serviced camping for self-contained RV’s. More event details will be posted at www.riversidespeedway.ca as available. Sign up for the Riverside News to have track newsletters delivered directly to your device of choice.

The Ron MacGillivray 150 is one of six PST events to be broadcast live online by Race Time Radio.

The Parts for Trucks Pro Stock Tour opens its 2016 season May 21 at Scotia Speedworld with the Lucas Oil 100. Start time is 4 p.m. Tickets will be available at the track on race day.

Riverside International Speedway, a 1/3-mile high banked asphalt oval, is located in James River, between New Glasgow and Antigonish, at exit 30 off Trans Canada Highway 104. Opened in 1969, the facility was totally rebuilt in 2006 to become a premiere motorsports site, comparable to the best short tracks in Canada and the U.S. To learn more about Riverside International Speedway, please visit www.riversidespeedway.ca or call 902.863.2410.

About the Parts for Trucks Pro Stock Tour:

The Parts for Trucks Pro Stock Tour (PST) is considered the highest level of stock car racing in Canada. The Tour is recognized in the industry as one of the healthiest stock car racing series in North America. PST visits five tracks throughout the Maritimes during its May through September season. The Parts for Trucks Pro Stock Tour is owned and operated by Maritime Pro Stock Tour Limited. For more information, call our administration office at 902.481.2531 or click www.maritimeprostocktour.com.